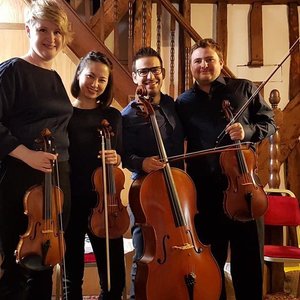 Traffic gridlock brought on by flooding resulted my arriving late, but the players were affected, too, and the consequent delayed start meant I was still able to hear most of Mozart’s D minor String Quartet, K421, albeit from the foyer. The second movement’s emotional poles of suavity and agitation were finely balanced, and the underlying unease in the Minuet was pointed up by the Quartet’s capricious account of the Trio section. The finale’s edgy, shifting moods found an oasis of calm in the Variation 4, before the unsettled ending.

Shostakovich’s Fourth Quartet begins in a kind of abrasive rusticity, as if making a caustic comment on the sort of thing he felt expected to write. The moment when the harmony suddenly clears felt like a real moment of release, and a turning-point, before the long, slow wind-down.

The second movement was charged with a kind of dignified sorrow, the opening expressive solo for muted first violin leading the way, and ended with an unmistakeable aural question-mark. Shostakovich is as enigmatic as ever in the third movement’s sombre, nervy dance, and the grotesque gesture linking it to the finale was delivered in all its lumpy strangeness. The last movement itself, another dance, slower and heavier, boiled over in a veritable howl of protest, before the disembodied ending, the players in complete control of their wisps of tone.

The off-kilter introduction to Beethoven’s Quartet in C, Op 59 No 3, comes from a similarly strange region, and even in the apparent blithe unconcern of the rest of the first movement, the players allowed more mysterious moments to show through. The pizzicato opening to the second movement was one point where the cello seemed over-dominant, but the music settled into a gently swaying lyricism. If this performance was a little light on the slavic melancholy that some commentators have heard in the music, that wasn’t necessarily a bad thing. The Minuet was properly relaxed and low-key as a buffer between this and the runaway train that is the fugal finale. The Artesian Quartet was clearly determined to pull no punches, and provided a thrilling conclusion to an extraordinary (in more ways than one) evening.