The Eblana String Trio has played for Derby Chamber Music before, but this was the group’s first visit without an additional player, and it was good to have them shining a spotlight on repertoire that is too often overshadowed by that of the string quartet.

Starting with one of the medium’s early masterpieces, Beethoven’s Trio in G, Op 9 No 1, the players brought a sense of expectation to the slow introduction, and a lyricism both relaxed and alert to the main part of the movement, with playing that also had pin-point delicacy and precision. Sustaining well the second movement’s long-breathed lyricism, they savoured its poignant harmonic shifts, and found the playfulness in the Scherzo. They sent the finale careering along at a cracking pace, keeping a grip on both the music’s overall shape and its moment-by moment unfolding, making delightful moments of its slipping in and out of unexpected keys.

Lawrence Rose, former Derby resident, and one of Derby Chamber Music’s main architects, now living in Chicago, has had his work featured here before. Transformations, composed in 2015, is dedicated to the Eblana Trio, and this was its first performance. Its continuous twenty-minute, rondo-like structure begins with an apparent glance back to early twentieth-century Vienna (Richard Strauss and Korngold, specifically, came to mind), continuing in a confident tonal style all its own. The nicely varied textures include ear-catching passages of expansive violin phrases over high-energy pizzicato viola and cello, and the three players each have good solo opportunities. The moment when the big central meditative passage flips with nonchalant ease into something more playful was an amusing subversion of expectations, from both the composer and the performers.

Finzi wrote little chamber music, but his brief but powerful Prelude and Fugue is a fine work that should be better known. The Eblanas explored every reach of its searching Prelude, and judged to a nicety the steady gradations of the increasingly passionate Fugue.

The title of Sally Beamish’s The King’s Alchemist refers to John Damian, court alchemist to King James IV of Scotland in the early sixteenth century. His lack of accomplishments included failing to turn base metal into gold, and a spectacularly unsuccessful attempt to fly from the castle battlements. Beamish’s work observes him with amusement but not ridicule, taking as its musical foundation the fifteenth-century popular song ‘L’Homme Armé’ the basis of a mass setting by another member of James’s entourage, Robert Carver (c 1484-c 1567). The first movement, all ghostly harmonics, is full of tiny but unmistakeably Scottish-sounding melodic inflections. In the “unstable scherzo” (Beamish’s own description) that follows, the sul ponticello and glissando figures suggest someone trying and failing to cut an imposing figure. The Eblanas characterised all this vividly, drawing the third movement’s graceful pavane to a tense final cadence, before the finale takes us to Damian’s attempted flight. After revisiting the opening harmonics, it settles into a march whose desperate bravado is infiltrated by mocking bird calls. The final “unresolved ascent” was delivered with gentle, affectionate nonchalance.

EJ Moeran’s String Trio, with its characteristic mix of English and Irish influences, is another work that deserves wider recognition. The Eblanas caught the first movement’s seven-beat rhythmic fluidity on the wing, bringing out an unexpected melodic echo of the Beethoven. A cello ostinato leads the music into a darker place explored more fully in the second movement; the players were particularly good at judging its hesitant ending. The jig-like energy of the third movement evaporates, forming a bridge into the fourth. As the performance made clear, the lyricism doesn’t quite escape the earlier shadows, until the scene switches abruptly to a pub folk-music session, with the viola starting a reel and the others joining in. The resulting hoe-down swung with real earthy exuberance. 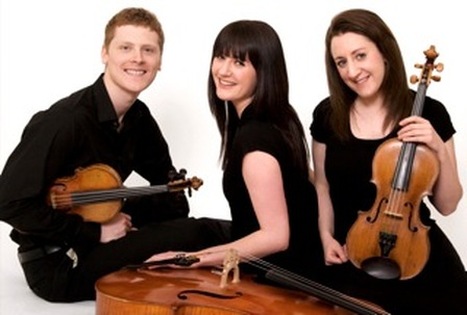 On completion of his first String Trio, composer Lawrie Rose blogs “Feel I have been successful and am very pleased with it”.

“Their playing was sublime … “ Sandra Carlton