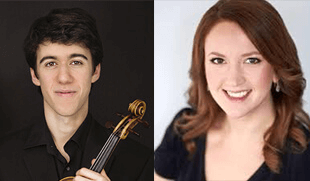 Kindly supported by The Countess of Munster Musical Trust

One of the joys of listening to chamber music is sensing a close rapport between the players. It was the abiding impression of this deeply satisfying violin and p

Mozart’s Sonata in B flat, K454 was notable particularly for Emmanuel Bach’s sonorous double-stopping and his and Jennifer Hughes making something really forceful of the movement’s ending, all while resisting any hint of over-plushness. A probing account of the second movement was followed by a finale full of Mozartian impudence, teasing in quiet scampering passages, and with a touchingly hesitant moment near the end.

In Brahms’ Sonata No 1 in G, Op 78, similarly, there was no grandstanding, just deeply thoughtful musicianship. From its gently unhurried start, the first movement had a quietly mysterious feel, and the climax didn’t have to strain to make its effect. The second movement was allowed to speak eloquently for itself, the players finding in it something more active than just a reverie. The finale, based on two songs by Brahms with rain as a central image, saw Hughes’ beautifully even touch in the piano’s pattering figures complementing Bach’s poised phrasing, both of them suggesting the ambiguous emotions below the surface.

Tchaikovsky’s Souvenir d’un Lieu Cher, (Memory of a Beloved Place), Op 42, is an offshoot of his Violin Concerto, literally so, as the opening ‘Méditation’ was the Concerto’s slow movement until Tchaikovsky changed his mind. Bach and Hughes caught its shifts between thoughtfulness and caprice, made a bouncy delight of the central Scherzo, smoothing over the middle section as an effective contrast, and bringing aptly song-like eloquence to the concluding ‘Mélodie’.

The technical challenges of Wieniawski’s Fantasie Brillante on Themes from Gounod’s Faust were met with such aplomb you scarcely realised that they were challenges. The two-part violin writing near the start was completely secure in Bach’s hands, while Hughes built a real head of excitement in the approach to Mephistopheles’ drinking song. It was an uninhibited romp, and the concluding waltz went with real swing, Bach throwing off harmonics like confetti.

All good virtuoso stuff, but Debussy’s song ‘Beau Soir’, in Jascha Heifetz’ transcription, took us to the real expressive heart of Bach and Hughes’ remarkable partnership.