The thing with Beethoven is, you have to watch out for the booby-traps. There are plenty in his ‘Archduke’ Trio (Op 97 in B flat), but the Aquinas Trio, whose cellist (and patron of DCM) is Derby-born Katherine Jenkinson, proved to be a match for all the sudden switches of mood, rhythmic dislocations, and so on, that  he could throw at them. They also have a nose for whatever might be below the surface. So while the geniality of the first movement’s opening was well served, so too was its underlying sense of purpose, while still finding space for a moment of breathtaking stillness in middle. The Scherzo’s outer sections were sent playfully spinning, and the mysterious trio section broke into an emphatic, stamping dance with evident delight. There was compelling stillness, too, in the third movement’s first couple of variations, while the textural complexity later was kept superbly transparent. The sudden switch to the fierce humour that drives the finale was a corner smartly turned, and the final section scampered along mischievously.

The evening’s first half produced a delightful surprise for many in the audience, Turina’s Piano Trio No 2. While the echoes of Debussy and Ravel are clear, they don’t swamp Turina’s own voice, and the Aquinas Trio had the measure of both his laid-back charm and his energy. The second of the three movements flowed with seeming effortlessness, and the finale, for all its abrupt changes of mood, emerged all of a piece.

Schumann’s Trio No 3 is not that well-known, either, but the players were completely at home with its emotional range, pressing forward and easing back as appropriate, and bringing lucidity to most intricately-scored passages, such as the first movement’s contrapuntally knotty later stages. In the slow second movement, the transition to the quicker middle section was both clear-cut and seamless, while the following scherzo had an intriguing air of reticence in spite of its driving energy, given an apt air of obsessiveness, and turning almost violent at the end. The players then found the ideal balance-point in the finale’s forward motion, between a vigorous stride one moment, and a gentle stroll the next. 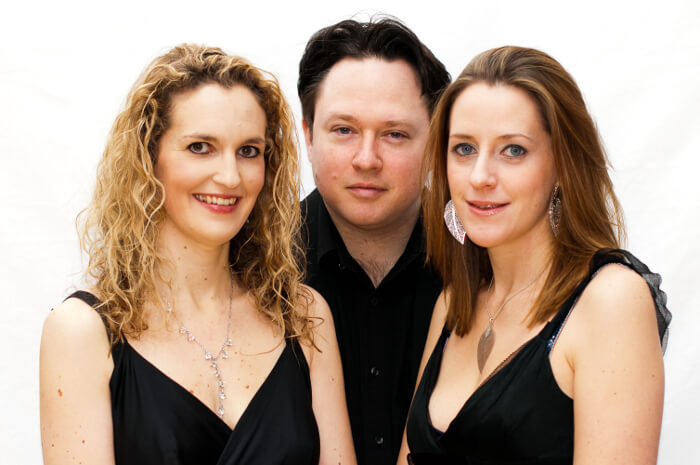 This superb Trio, who are regular visitors to our society, begin the season with a programme that includes a rarely heard piece by the early 20th century Spanish composer Joaquín Turina.

“Exquisite virtuosity from all the players, with beautiful tone and flawless unity and movement.” Musical Opinion