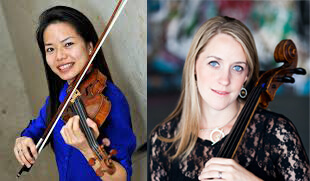 Patron cellist Katherine Jenkinson and violinist Ning Kam opened Derby Chamber Music’s new season with a programme full of piquant contrasts, starting with Mozart’s Duo in G, K423. Johann Traeg’s transcription for cello of the viola part inevitably darkens the piece, but the first movement was still full of sprightly backchat between the two instruments. After savouring the characteristic Mozartian expressiveness of the second movement, they brought a sense of bubbly fun to the finale

They then had a solo spot each. Jenkinson followed her poised reading of the Sarabande from JS Bach’s Cello Suite No 2 with the rip-roaring Julie-O by American composer Mark Summer, delighting in its every rhythmic and technical challenge, not least the pinging pizzicato slaps he calls for in the middle. Kam used a baroque bow and minimal vibrato for her searching account of the Adagio from JS Bach’s Sonata No 1 for solo violin, and made the counterpoint of the following Fugue dance.

They came back together for Martinu’s Duo No 1, concentrated in their exploration of the first movement’s harmonic tensions, touchingly withdrawn in its unsettled ending, and pointing up the exuberant whirling energy of the second.

In Ravel’s Sonata for violin and cello they found a balance-point in the curious mix of detachment and intensity that characterises the first movement, and searched the demonic side of the phantasmagoric scherzo, incisive in its explosive accents. Their compelling account of the inscrutable slow movement was particularly effective in the fragile muted passage, before they gleefully set about the skewed march rhythms and fractured lines of the energetic finale.

Kam and Jenkinson ended by repeating a showstopper from their previous appearance together, a set of variations on ‘God Save the King’ composed jointly by Belgian violinists Adrien François Servais and Joseph Ghys. This throws at the tune just about every trick in the nineteenth-century virtuoso book, and the two players projected its expressive gamut, from the Tom-and-Jerry chase of Variation 2 to the intensity of the ending, with relish.